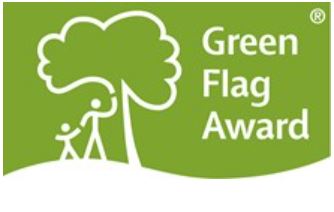 The Green Flag Award scheme was introduced in 1996, and first awarded in 1997. It is the benchmark standard for the management of recreational outdoor spaces across the UK and around the world. Green Flags proudly fly above more than 2,000 places in over 15 countries in an enormous variety of green spaces, including parks, cemeteries, countryside sites, crematoria, university campuses, and housing estates. Wherever you see a Green Flag in the UK, you know you’re visiting an exceptional place with the highest standards and one of the country’s best green spaces.

The Green Flag Award scheme is run by the environmental charity Keep Britain Tidy, who also run the Blue Flag Awards for beaches. The objective of the scheme is to encourage the provision of good quality public parks and green spaces that are managed in environmentally sustainable ways. In being awarded the award, Waterloo Park showed that it was a welcoming place with good signage and equal access for everybody, and had clean and well-maintained facilities. Litter and waste was shown to be properly managed, and the grounds, buildings and equipment well-maintained. The judges looked for the park to be environmentally sustainable in terms of the materials and chemicals it used and the amount of wastage it produced, so that the environment was properly managed.

The Award reflects the high standards of maintenance by Norwich City Council to keep Waterloo Park looking as good as it does, and also the involvement of the Friends of Waterloo Park, and other partner organisations who help to keep it tidy, attractive-looking and well used.